In this post I shall be discussing on what the Putnam is and what to expect from this exam, my thoughts on this exam while I was writing it and also my results.

What is the Putnam?

The William Lowell Putnam Mathematical Competition is the preeminent mathematics competition for undergraduate college students in the United States and Canada. The Putnam Competition takes place annually on the first Saturday of December. The competition consists of two 3-hour sessions, one in the morning and one in the afternoon. During each session, participants work individually on 6 challenging mathematical problems.

In simple terms - Hardest Math Exam in the World

Putnam questions are hard. Really hard. The median score most years is a zero—that is, at least half of takers receive no points at all. You probably will have no idea how to do most of the questions on the test, and that’s okay. To get in the top 500 a score of 21 or above is required.

The best way to describe the Putnam is :

That is to say, not doing well on the Putnam doesn’t really say anything about your potential as a real mathematician, just as an inability to sink a three-point shot blindfolded on one leg while reciting Casey at the Bat shouldn’t keep you out of the NBA.

But, if you can sink such a shot, then you (a) have some pretty serious bragging rights, and (b) might have a higher likelihood to succeed in the NBA. By the same token, doing well on the Putnam exam is certainly a nice point of pride, and should give you a warm fuzzy feeling about your mathematical future. But just a small one though… don’t lose your head. :)

In any event, I get the feeling most people take the exam because they think it’s fun, not to prove anything (ha, see what I did there?) There are math majors who hate that kind of thing, and that’s fine too.

Most of the Important links are as follows

Thoughts while I took the Exam

Well personally for me I really loved the exam and as It was my first time participating in this exam I was really excited. On December 7 2020 I remember I woke up early and just ran to CAB - 263(One of my fav buildings in the University of Alberta) for the exam and as usual there was literally and CAB was dead empty and so I waited for like literally 30 minutes before I could see other people finally approaching the room and I was really excited. The proffesor finally came after 45 minutes with the sealed box and as we all got settled in I remember there were probably like 7 students and I kinda got nervous. Well anyways as we got the exam sheet I was really excited to solve the problems and here goes my review on each problem

A1 - Tried some manipulation and got some generalized result and genuinely thought I solved the problem but the markers were strict and so gave me only a point.

A2 - Honestly this I messed up big time and geometry isn’t really my forte and so just drew some general observations but did not solve it.

A3 - Had no Idea how to start so left it and did not really know much of Complex Analysis.

A4 - Some weird multivariable calculus so left it and just said it was true without any observations.

A5 - Had no idea how to solve this by analytic number theory techniques and ring theory.

A6 - This problem I had some idea and tried using L - Hopitals theorem to squeeze the limit and also tried using some real analysis techniques but apparently they turned out wrong but I tried my best.

B1 - Another Problem I thought I solved but instead of getting 5n+1 I got 4n+1 and omg I was really sad I really thought I got this one and A1 in the bag but they gave me just a point but it was worth the effort.

B2 - This one I should have solved but somehow ended up converting it into Riemann Sums and got 8 instead of the answer.

B3 - Never expected a Linear Algebra problem to pop up on the Putnam but at that point I really did not have sufficient knowledge on orthogonal matrices I ended up proving the converse of the statement and made a huge mistake.

B4 - Had no idea how to solve this PDE problem.

B5 - This one I really thought I got it but somehow made some mistakes on the way.

B6 - This problem I knew the concept and what they were asking also just shortly after the exam I saw a numberphile video where they explained this concept for higher dimensions.

There goes my explaination, but at the end of the day I really had fun solving these problems, meeting new people and getting to learn more and the 6 Hr exam was honestly worth it. 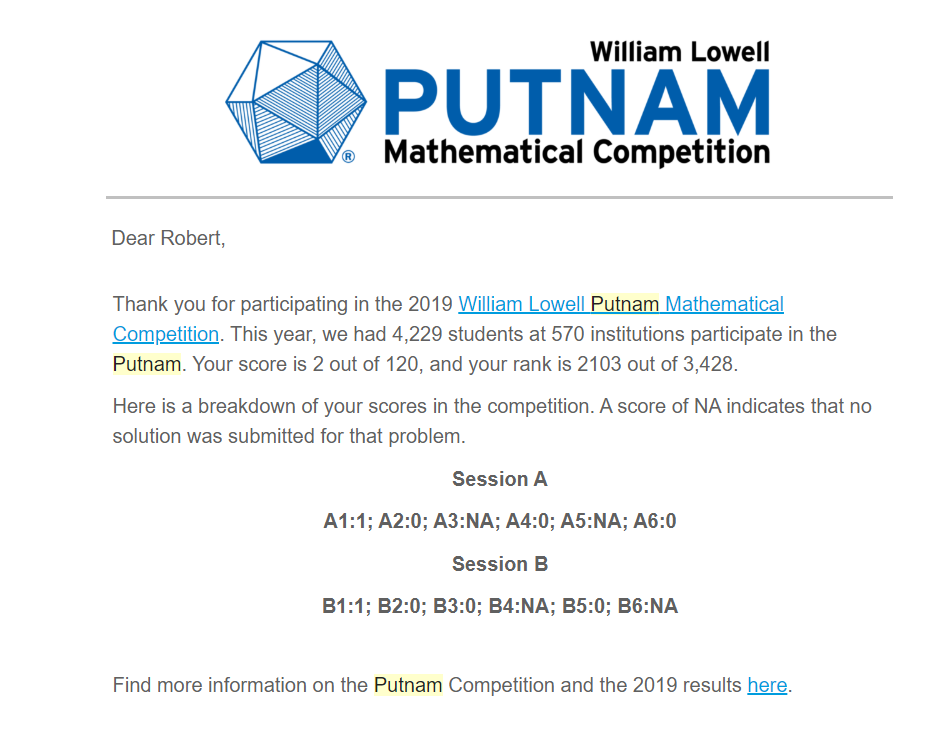 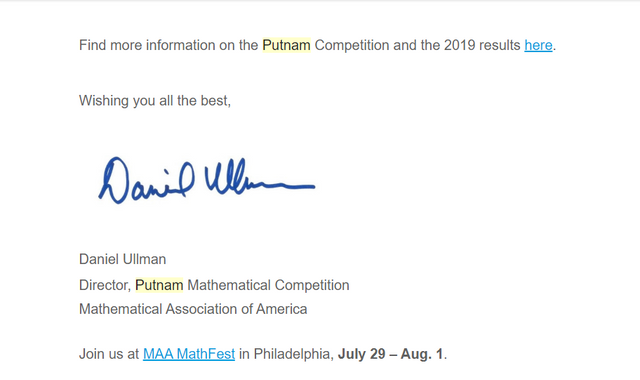 Well I personally am really happy with these results and I hope to do well in the upcoming years. So to everyone writing this exam take it easy on yourself, practice problem solving and just be at peace while you write the exam. Definietly learnt a lot this year while I took this exam and hopefully I can write the Putnam again for the next 3 years.